Far away is closer than you think

The 2014 Caritas campaign makes clear that the way we act changes the world. Climate change, fair working conditions, flight and expulsion are relevant for all of us –because, in a globalised world, being “far away is closer than you think”. 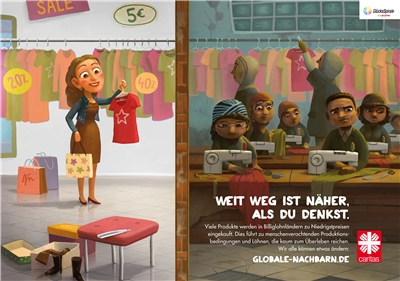 In a globalised world, being “far away is closer than you think".

Many people in Germany and all over the world are taking a stand for more justice. These include the staff of Caritas international, the German organization for disaster relief. They act as "global neighbours”, strengthening the weak and campaigning together for a better world.

Connecting people all around the globe

In Germany, the Caritas campaign unfolds its power through people who plan many activities and events in the relevant services and institutions - be it the themed annual reception of an association, the supervision of homework for children from Romania, or politically standing up for refugees who need to have a place in communities and experience open hearts. On the grounds of social and ecological responsibility, Youngcaritas and some charity department stores are increasing the value of old items by upcycling them instead of throwing them away.

The 2014 Caritas campaign aims to connect people around the globe who are united by the yearning for justice. As Nelson Mandela put it: "What counts in life is not the mere fact that we have lived. It is what difference we have made to the lives of others.” Furthermore, the campaign aims to encourage you, too, to act responsibly. Show all that lived and breathed global neighbourliness can make possible.