Let’s all be do-gooders

About a term’s defamation and an attempt to reinterpret it. The 2020 Caritas campaign is committed to solidarity and cohesion in society.

In 2015 Germany declared "Gutmensch” ("do-gooder” in English) the most inappropriate word of the year. In their explanation, a jury of four linguists and a journalist pointed out that although the word had been in use for quite some time, it "had gained particular prominence in connection with the issue of refugees”1. In 2011, "do-gooder” came in second. 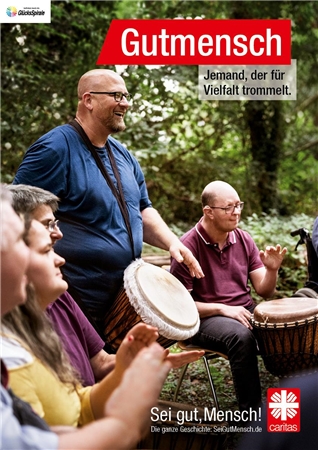 The jury continued in its explanation: "Accusing someone of being a ‘do-gooder’ or practicing ‘do-goodism’ universally dismisses tolerance and the readiness to help others as naïve, stupid or symptomatic of a worldly innocent helper syndrome. But the expression ‘do-gooder’ is not just flourishing in the right-wing populist sector as a call to arms. Instead, it is also being used from time to time by journalists in major media. The use of this expression thus prevents a democratic exchange of objective arguments.”2

Grossly inappropriate words become entrenched as a result of use

It is interesting to analyse the intent behind the most inappropriate word of the year. Under the heading "The basic assumption: Grossly inappropriate words become entrenched as a result of use”3, the concern is defined on the website: "Expressions in language become grossly inappropriate as a result of their being uttered thoughtlessly or with intents which are deserving of criticism, and this in the public context … The criticism of them is an expression of hope for more accountability in the use of language.”⁴

The most inappropriate word of the year is selected on the basis of submissions made by citizens. 64 people submitted "do-gooder”, which was the third most suggested word in 2015. These people were obviously unhappy with the spurious use of this term.

Every community is (also) sustained by people who are willing to engage, act on others’ behalf and help where help is needed. The wish to disparage this good behaviour and treat it with contempt by means of the term "do-gooder” is not acceptable.

This is precisely where the Caritas campaign gets started. With the challenge "Do good!”, it is an invitation to take action. This means supporting people who need assistance, in real terms and also politically. And vehemently protecting "good deeds” from belittlement and defamation.

It is critical that this not be taken as moral finger-wagging. Instead it is much more a matter of making people aware and reminding them that getting along with one another is a responsibility we all share. Everyone can do something. And everyone has to.

We are experiencing a time of major upheavals. Digitalisation and globalisation are fundamentally changing the world in which people live and work. The change processes are intensified by immigration and migration. Issues which will remain virulent in the years to come.

All of this leaves people feeling insecure and set adrift. They are struggling to hold on to their own place in society or they are afraid of losing their social status. Worries and insecurity result in a decline in people’s readiness to be tolerant and an increase in fears of being forgotten or even "steamrollered”. For many people, the solution lies in seeing themselves as separate from others, in behaving sceptically or disparagingly vis-à-vis diversity and in limiting themselves to what they know and trust.5 This is not conducive to cohesion in society. It results in isolation, disapprobation, cracks in the social structure.

A newspaper article from 2018 about society’s drifting apart had the headline "Everyone wants to be an island”6. On the basis of the Arena Analysis 2018 "The others and us”7, the authors analyse how the idea of large-scale community is losing strength and people are isolating themselves into smaller and smaller groups.8 Thus many are marked by the fear of losing their sense of social belonging and spirit. Paradoxically, in the quest for more cohesion, smaller groups form, which resolutely keep themselves separate from the outside world.9

It is in social media that this development is at its most visible and is increasingly subject to criticism. When people (can) only read the news which is offered to them by the algorithms of Facebook, etc. and which accordingly reinforces the corresponding worldview. "The mutual exclusion on these platforms occurs practically automatically as a result of the underlying algorithms … No one notices the host system pulling the blinders tighter and tighter.”10

Tolerance, respect and solidarity: These are key

Blinders are not conducive to perceiving diversity, coping with differences or achieving consensus. Tolerance and respect are critical in a world where different ways of life, cultures, nations and religions make it necessary to have constructive discussions with one another and achieve consensus. An almost quaintly old-fashioned term is making a comeback: solidarity.

Sociologist Heinz Bude sees a distinction between empathy and solidarity: "Being empathetic and understanding someone does not necessarily imply solidarity at all.”11 For people like this, solidarity is a "model of symmetry”12, which links one’s own behaviour to one’s understanding of oneself: "Your self-understanding includes sharing in certain situations. The fundamental mode is not giving, but sharing.”13 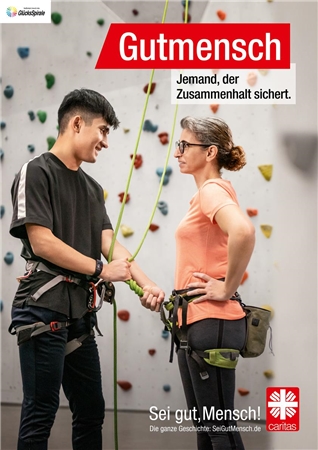 This is where the Caritas campaign "Do good!” comes into play. It demands a behaviour of solidarity vis-à-vis people in crisis. This solidarity can be rendered visible in the form of real action and real help, and it can be rendered visible in the form of political action and political demands. A reference to the mission statement of the German Caritas Association is fitting. It reads: The German Caritas Association "commits itself to people who live on the fringes of society, who have no public voice and who are unable to help themselves. It makes their needs and concerns public and supports them in securing their rights. It counteracts societal and political developments that lead to the discrimination of individuals and families or to the exclusion of social groups.”14

Within the scope of the Caritas campaign, people will be presented who treat others with empathy and solidarity in many different ways. They work internationally in Caritas’ emergency and disaster relief programmes; they prevent food from being thrown out; they take part in virtual car races with senior citizens; they support grieving children and youth; and they are involved in democracy projects. They work in Caritas facilities and services, they choose to serve as volunteers at Caritas or at other organisations or associations. Every single one of them shows that it is possible to make a contribution - no matter how big or small - in order to maintain social cohesion in our society and worldwide.

Do-gooders are not naïve

All people "do good”. This in no way means that these women and men and youth are naïve or gullible, or that they are simple-minded or dreamers. Quite the contrary. They are people who allow themselves to be touched by their surroundings; who can and want to take action; who are willing to share their time, their attention and also material things. They are people busy living their lives, who have work, friends and family, and yet have the time and energy to be there for others. It may be a project with a deadline, it may be over the course of several years, or it may be just one event. They want to take on responsibility outside their own sphere. Giving those who are weak a voice is important to them. Taking action politically is important to them.

"Do-gooder” was declared grossly inappropriate because the term disparages tolerance and the readiness to help others. In addition, the jury pointed out that the term with its lack of objectiveness stands in the way of a democratic, productive discourse.15 The frequent and improper use of the term by populists has enabled and strengthened the negative connotation of the term.

To generate resistance at this point and attempt to turn perspectives around - not just with regard to the use of the word "do-gooder”, but also in view of the corresponding debates - is another aim of the campaign. Admittedly, it is an ambitious undertaking, one which will also be seen as a challenge. In the 2020 campaign year, we will therefore have to prepare for possible antagonism and rancour. We have to assume that there will be slurs, hate and malicious gossip. But we want to take a very conscious stand: a person who does good must not be disparaged.

We want to turn the meaning of the word around

We aren’t alone in this matter. Take, for example, the commitment demonstrated by the punk band "Die Toten Hosen”. In 2014 the band secured copyrights to the word "Gutmensch” for use in connection with merchandising products. In an interview, the band’s manager, Patrick Orth, said: The entry was actually an "inside joke”. For decades now, the word has been used to discredit people who are dedicated to helping in society, explained Orth. "In order to regain the power of interpretation, we came up with the idea of copyrighting the word.”16 And at the Caritas Congress in March 2019 in Berlin, the blogger "Gutmensch” blogged on the issues and concerns of Caritas.

In this way, others also support the aim of not permitting solidarity-based behaviour in society to be disparaged or treated with contempt. Caritas wants to make its contribution to the fight against such defamation with this campaign. We want to "turn around” the meaning of the word, we want change the polarity from negative to positive. This is ambitious, and there is no guarantee of success. But we have got to try.

A good life for all is only possible if cohesion is maintained, if people are there for each other. The many employees of Caritas make their contribution to this every day in all the facilities and services. They are supported by many thousands of volunteers at Caritas and at many other associations, clubs and organisations. "Solidarity is the only remedy for embitterment,”17 according to Heinz Bude.

The campaign is to be seen in this context: Many acting together with solidarity for cohesion and an atmosphere of cooperation. Do good!